For more than a decade, Renny Doyle and a growing team of experienced detailers from around the country have been restoring, maintaining, and preserving the first presidential jet Air Force One. Known as SAM (Special Air Missions) 970, the plane was a flying Oval Office for four U.S. Presidents including Eisenhower, Kennedy, Johnson, and Nixon. The Boeing 707-120 also entertained many international VIPs such as Nikita Khrushchev and Henry Kissinger.

It began with a phone call in 2002 from a Bush administration official asking Renny to bring a team to Seattle's Museum of Flight to clean and attempt to restore the deteriorating paint on the iconic jet.

The restoration project started in 2003 with Renny and a small staff. In 2007, Renny opened up the project to a team of experienced detailers who had been through his training. By 2010, the team had grown into a highly specialized and selective team of about 30-35 detailers. That team, numbering 50-55 today, returns every year as caretakers of the multi-million-dollar icon of American history.

Over the years, the project has grown to include dozens of other iconic aircraft including the Concorde and WWII bombers! Enjoy our story!

2019- 1st Year on the Air Force One Detailing Team 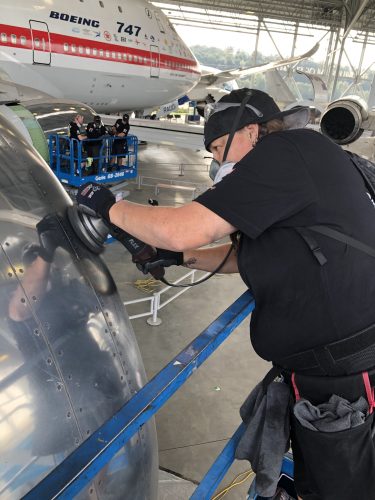 Kona’s first female detailer, Kelly Mankin of Ake Ake Professional Detailing has been hand-picked for the much anticipated 2019 Air Force One Detailing Team at Seattle’s Museum of Flight. She has been selected out of hundreds of detailers nationwide by the original “Detailer of Air Force One”, Renny Doyle of Detailing Success. Doyle announced this year’s 55-person team just in time for the Independence Day holiday, and he will lead the weeklong project at the museum, July 7-14.

Mankin is one of only two females debuting on this year’s team, and one of only four on the overall team, which includes Doyle’s wife and business partner, Diane Doyle.

Mankin is an experienced automotive and aircraft detailer on the Big Island and is also the Big Island’s distributor for Flex buffers and for P&S Sales who developed Doyle’s Double Black car care line. Both are sponsors and contributors to the Air Force One project.

For 16 years, members who are chosen for the exclusive Air Force One Detailing Team, do so voluntarily as their patriotic duty to restore, maintain and protect the original presidential jet Air Force One and more than a dozen additional historic aircraft currently on exhibit in the museum’s new Airpark Pavilion.

In addition to Air Force One, which is currently in preservation stages after 15 years of restoration, the team will continue restoring a solid aluminum WWII B-29 Super Fortress Bomber and a recently acquired and badly deteriorating Vietnam-era B-52G Stratofortress Bomber. They will also clean and continue to maintain the first-ever Boeing “Jumbo Jet” 747; the Concorde Alpha Golf; and the first 1960s-70s-era Boeing 727-022 commercial airliner – all three, planes previous teams have begun restoring in the past 5-10 years. 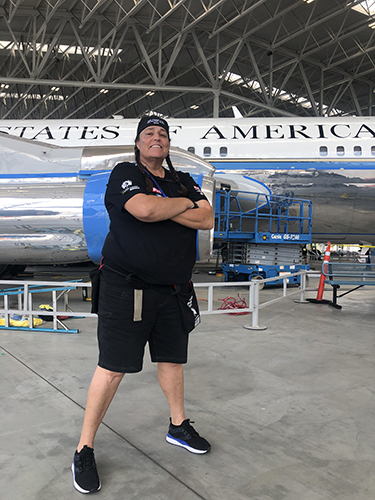 “I trained Kelly as an expert in all types of paint and helped her perfect her skill at cleaning and polishing paint and metal, so I knew when I chose her for the team this year, she is experienced, qualified, and will do a great job,” said Doyle. “She has an eye for detail and an instinct for perfection that is an absolute ‘must’ for this project, and it will give her an experience she won’t get anywhere else.”

“I certainly never expected to be detailing multi-million-dollar historic airplanes when I got into detailing,” said Mankin. “But getting the opportunity to clean and polish and be caretakers for all these iconic aircraft – especially Air Force One – is something I will not forget! I am honored to have been chosen for the team and it makes the Fourth of July holiday special this year.”

Air Force One is the first presidential jet, known as a flying Oval Office for four American presidents including Eisenhower, Kennedy, Johnson, and Nixon. It entertained International dignitaries like Nikita Khrushchev and Henry Kissinger. For more than a decade, it lived on the open tarmac exposed to Seattle’s notorious climate.

In 2003, a Bush-administration executive contacted Doyle about saving the deteriorating paint and brightwork on the iconic plane. Doyle was known for his skill at paint correction and restoring the shine on classic cars, as well as his knowledge in caring for expensive car collections, exotics, and aircraft.

“That beautiful jet was in such a distressed state when I first saw it in 2003, and it was just me, my wife and business partner Diane, and a few staff members who decided anything we did would help and nothing we did could make it worse,” said Doyle. “There was a lot of new technology, new equipment, and innovative products coming onto the market for professional detailers 16 years ago that I had been field testing.

“Since then, those tools and products – some for which we have developed specifically based on the needs of this project, have been instrumental in bringing the plane up to the excellent condition it is in now.”

The plane is in excellent condition now, but still requires an annual cleaning because even though it does not sit exposed on the tarmac, it is inside an open-air pavilion, covered but still subject to the dampness and cold that causes her paint and brightwork to get cloudy.